With “dizzying" speed of economic development today, the problem of air pollution is becoming increasingly serious and receives a lot of concern in the world in general and Vietnam in particular.

What is the reason?

Air pollution means the presence of a foreign substance or an important change in the composition of air, making the air unclean, which causes smells, unpleasant odor, and reduces visibility (due to dust). 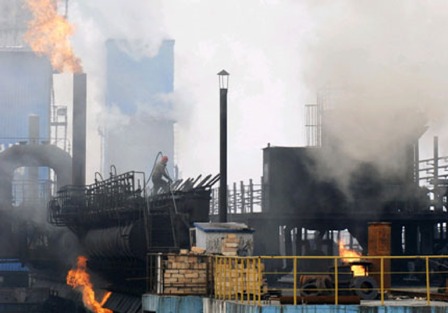 The cause is mainly due to industrial activities of humans such as fuel combustion which emits huge amount of toxic gases. The main industries which cause air pollution are: thermal; building materials; chemicals and fertilizers; tex forget to mention human life activities.

Also a large portion of the flue gas sources comes from transportation vehicles.

Mr. Jacques Moussafir, a French expert at a seminar on improvement of air quality and urban transportation, stated: "In big cities in Vietnam, air pollution affects people activities all the time, everywhere, especially in the capital, Hanoi. This is one of the most polluted cities not only in Southeast Asia but also in the whole Asia. "

According to a study published in the World Economic Forum in Davos, Vietnam is among 10 countries with the lowest air quality which causes severe health effects.

On the basis of allowed criteria to assess air quality worldwide (Air Quality Index- AQI), if the cleanliness level of the air is from 150-200 points,  the pollution is at considerable level;  from 201-300 - extremely urgent which will seriously affect the health of people.

Meanwhile, in the two most polluted cities: Hanoi and Ho Chi Minh City in Vietnam, daily indexes are always at 152-156, and in peak traffic hours nearly at 200. 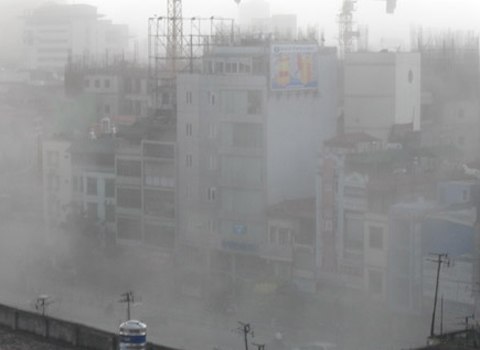 Mr. Jacques Moussafir also said that the amount of dust PM10 is 4 times higher than the level recommended by WHO. PM10 dust is very small inorganic particles, suspended in the air, can penetrate through the masks to enter and accumulate in the lungs, causing respiratory diseases.

Also in Hanoi, according to a survey conducted by Hanoi Department of Health, 72% of households have people affected by air pollution. This rate is so high compared to other regions in the country, as Hanoi and HCM City have been identified as two the most polluted cities. 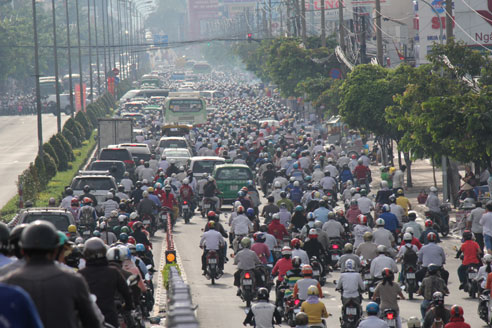 Vietnam is ranked the 4th in the world for the number of using motorcycles. In accordance with the statistic data, currently, Vietnam has 37 million motorcycles and 2 million cars nationwide. However, this is only a registered number; we have to count unregistered vehicles (motorcycles) also. It means that toxic emissions from main vehicles in Vietnam are so horrible and very different from the developed countries in the world.

Mr. Jacques Moussafir warned: "With the current pollution levels and a growth rate of transportation vehicles at about 15% / year for motorcycles, and 10% / year for automobiles, the concentration of dust in Hanoi will likely grow to more than 200 mg / m3,  which is 10 times higher than WHO recommendations." 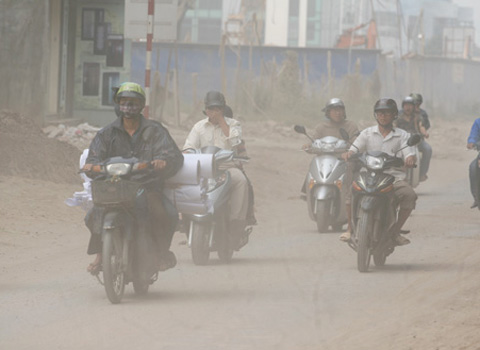 The primary air pollutants such as CO, SO2 cause headaches, dizziness, fainting, cardiovascular damage, strong effect on the eyes, skin and the muscle membranes, mucosal and windpipe.

In particular, children suffer the most from air pollution. In recent years, childhood diseases related to air pollution tend to increase. The most widely spread are: asthma, respiratory infections, tuberculosis, pneumonia, cerebral palsy, cancer and defects of newborn babies, etc.

In addition, air pollution is also a leading factor causing cancer. On the 17th  of October, 2013, World Health Organization (WHO), has put outdoor air pollution to be  one of the leading causes of cancer in humans. The International Agency for Research on Cancer (IARC) on the 16th of  October, 2013 also claimed that air pollution is a leading cause of cancer development, along with other known risk factors as asbestos ( a natural mineral substance that is commonly used in building), tobacco and ultraviolet radiation.

To protect human’s health from intoxication and to reduce the negative effects of air pollution, it is necessary to detoxify the body regularly,  to this end you can use PECTIN COMPLEX.

PECTIN COMPLEX – is a natural dietary detox supplement, which:

It is also helpful: