Parents despair for their little ones as air quality plummets 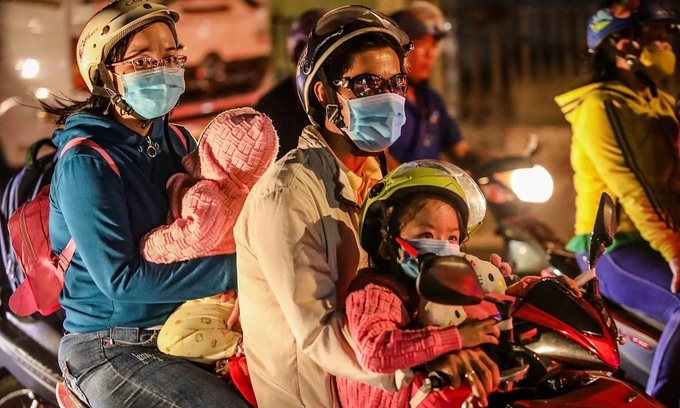 Air pollution is rising to deadly levels in Vietnam's major cities and children are the most vulnerable.

The arrival of one's first child is often a cause for excitement and joy.

But Richard Hosein, a Canadian, has mixed feelings. Nguyen Thi Thu, his wife, is only days away from giving birth to a baby girl, and he is increasingly worrying about their well-being.

There has been a thick haze in Hanoi, where the air quality is consistently rated "unhealthy."

The PM2.5 particulate level reached a five-year high last month, according to a report from the Ministry of Natural Resources and Environment.

The particles come from vehicles, industrial plants and natural sources like dust, and easily pass through lung tissue to be absorbed into the bloodstream, causing adverse health effects.

The 39-year-old fears the pollution might have harmed his unborn child.

Several studies have found air pollution affecting unborn children. A study done in the U.S.'s Boston city and published in the medical journal Environmental Health Perspectives found that pregnant women exposed to even low levels of particulate pollution had a higher risk of preterm delivery. High-rise buildings in a shroud of haze in Hanoi, October, 2019.

Hosein said: "I cannot see officials or locals taking meaningful or decisive action within a timeframe that can mitigate damage to a young child’s life."

He said his family plans to upgrade their breathing masks to withstand PM 2.5 or higher, and rent an air purifier for their apartment in Hanoi.

The couple moved to Hanoi just two months ago as his wife is from the north and the birth and marriage certificates could not be done in HCMC where they used to live.

They plan to move back to Saigon, where pollution levels are lower, after the baby is born and eventually to his country.

But a way out of Hanoi is not an option for many parents, including Nguyen Thanh Thuy, a mother of three.

She has an 11-year-old boy and two girls, eight and four years old.

She has reduced their outdoor activities to once a week instead of a few times when she lets them to run in the park and play in the sand with a Japanese-brand face mask on.

Several schools in Hanoi have stopped all outdoor activities and closed classroom windows, but not her children’s schools.

She sees no way out of Hanoi, where her entire family lives and her husband recently got a promotion.

On her phone screen, the Swiss-made app AirVisual, which she downloaded last week to keep track of the situation, shows Hanoi again taking top spot in the world for the city with the worst air quality at 10 a.m. on Friday morning. 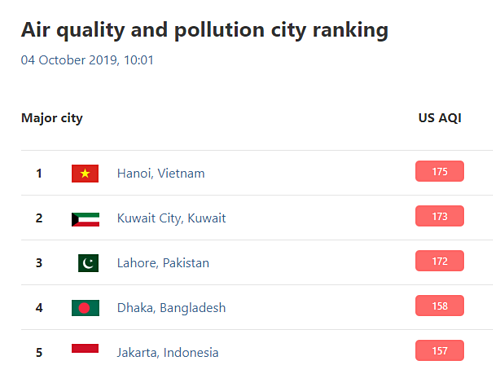 Screenshot of AirVisual website showing the air quality in various cities on October 4, 2019.

Saigon, 1,500 kilometers south of Hanoi, has also been hit by a thick haze lasting from morning to dusk every day and deteriorating air quality.

Pham Truong Son, one of the city’s 10 million residents, has come up with a ‘safe map’ showing places where the pollution is less to drive his seven-year-old son Rac.

"Usually I wouldn’t care much [about which route to take] when I take him to a movie or the park, but because of the pollution, I have been putting more thought into this," he said.

People with school-going children have no option but to take them in heavy traffic during rush hour to school and back.

Son has given Rac the only defense available at the moment, an anti-PM 2.5 face mask, but that does not ease his mind.

Rac’s outdoor activities have been restricted to trips to school and English classes afterward. 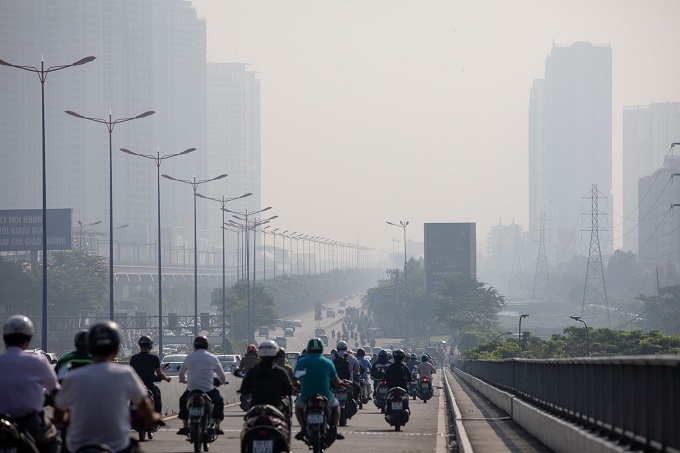 Smog looms over the Saigon Bridge in the morning of October 3, 2019.

Dave Lemke, a Canadian who has lived in Vietnam for more than a decade, can only give his eight-year-old son Aiden a face mask.

He said: "There is not much one can do other than buy some kind of protective mask. All I can do is talk to him about the dangers of breathing the bad air without a mask."

Dr Nguyen Thi Trang Nhung of the Hanoi University of Public Health and her colleagues did a study on the impact of air pollution on children hospitalized in Hanoi, and discovered children between one and five were more affected than younger ones mostly because they spend more time outdoors.

The study scrutinized every child admitted to the Vietnam National Children's Hospital with respiratory problems between 2007 and 2016.

Data collected from air monitoring stations in the capital during the period showed PM1, PM2.5, PM10, and nitrogen dioxide were related to lung inflammation like acute pneumonia and bronchopneumonia and acute severe asthma.

The most dangerous emission for children was nitrogen dioxide (NO2), one of a range of pollutants in vehicle exhaust and lead, which is an extremely toxic heavy metal.

A WHO report published last year said exposure to ambient air pollution can lead to failing lung function and asthma in children.

It found the burden of disease attributable to particulate matter in air heaviest in low- and middle-income countries, particularly in Southeast Asia, Africa, the Eastern Mediterranean, and Western Pacific.

In Southeast Asia 99 percent of children under five are exposed to levels of fine particulate matter (PM2.5) higher than WHO air quality guidelines, it added.

Nhung of the public health university said the government should devise a long-term national action plan to tackle the pollution.

"What can be done is improve public transport, limit private vehicles, provide separate lanes for cyclists, and keep industrial emissions in check."

Amid the public concern, the government has called on Hanoi and HCMC to have a clear and radical strategy to combat the pollution and to keep it notified.

"We must not let the public complain without proposing an effective solution," Prime Minister Nguyen Xuan Phuc told authorities in the two cities and the Ministry of Natural Resources and Environment last week.

Deputy Minister of Natural Resources and Environment Le Cong Thanh said a comprehensive national plan of action for improving the air quality is being implemented, including specific measures to reduce the sources of superfine particles.

In the meantime, urban residents will continue to hold their breath, and anti-pollution masks no longer help. People have to try the other ways to reduce the toxic burden on their health.

Doctors toxicologists recommend to take regular courses of body detoxification, it will help to eliminate heavy metals and other toxic compounds from the body effectively in a short period time.

One of the best and trustworthy products for cellular detoxification in Vietnam is PECTIN COMPLEX - a health detox supplement imported from Ukraine, that has a scientifically proven ability to cleanse the body from all known pollutants.

This product is absolutely safe and is officially approved for pregnant and breastfeeding women and children. It also strengthens the immune system and decreases the frequency of seasonal diseases in children.

PECTIN COMPLEX is used by Ministry of health of Vietnam and the National Institute of Occupational and Environmental Health of Vietnam for the national program of support treatment of lead intoxication of children and adults living in populated areas of Vietnam like Hung Yen , Bac Ninh , Ninh Binh , Bac Can, Thai Nguyen and others.