With rising incomes in Vietnam, environmental concerns are growing 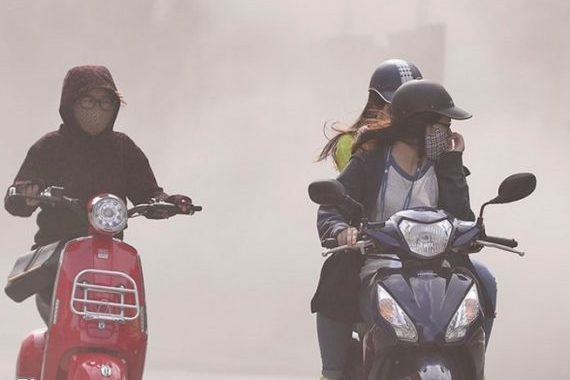 The rapid growth rate of gross national product in Vietnam leads to a sharp deterioration in air quality and other environmental problems, say experts from the Ministry of Planning and Investment.

In a study covering the five-year period from 2011 to 2015, the Ministry found that the air quality in Hanoi and Ho Chi Minh City reached hazardous levels with a high content of harmful particles.

The content of nitrogen dioxide in the air in Hanoi and Ho Chi Minh City is measured at 130% and 200%, respectively, of acceptable levels, the report says.

Nitrogen dioxide is especially harmful to children, the elderly and others with a weak immune system. Hazardous levels in the air are directly related to the high prevalence of respiratory diseases of the lungs, such as bronchitis.

A growing middle class and a corresponding increase in income lead to an increase in the number of cars and motorcycles on the country's roads, which are the main source of pollution, especially in urban areas, said Mr. Tung.

He added that official records show that, on average, 19,000 new vehicles are registered in Hanoi, and the pollution they cause is a major factor in reducing the air quality in the capital from unhealthy to dangerous.

In particular, he noted that the 2013 National Environment Report showed that air pollution in Hanoi was rated as unhealthy for more than 265 days a year, and the situation since then has worsened dramatically.

Mr. Jonathan London, a lecturer in world political economics at the University of Leiden in the Netherlands, said that the public and private sectors of Vietnam are not paying enough attention to the environmental consequences of many economic decisions.

In a hurry to get foreign direct investment, too often, Mr. London noted, environmental problems were hushed up.

Mr. Xavier Depullie, general manager of research in Indochina, said that the deteriorating environmental situation in Vietnam is the biggest urgent task facing the country. All city residents and residents of industrial zones are inevitably exposed to chronic intoxication with heavy metals and formaldehyde, which causes the development of a large spectrum of severe chronic diseases in the population and a reduction in life expectancy.

To maintain the health of adults and children of Vietnam, timely detoxification is badly necessary. One of the most effective natural products for complex cleansing of the body at the cellular level is a Ukrainian health supplement PECTIN COMPLEX. This product has a clinically proven efficacy in eliminating toxic substances of different etymologies from the body. Doctors recommend conducting 2 courses of cellular body cleaning with the application of PECTIN COMPLEX per year in order to avoid chronic intoxication and slag accumulation in the body and to prevent environmentally dependent diseases in children and adults.